Tagawa Has the Tools You Need to Fight Japanese Beetles Japanese beetles may be the most hated insect in our Colorado gardens, and now is the time to brace for their summer invasion.

They’re beautiful little creatures in their way…. about half-an-inch long,  have shiny metallic emerald green bodies with bronze wings, but that’s as far as the admiration goes.  Japanese beetles are eating machines and they’ll chew through some of our most popular garden plants and trees as fast as you can say “you gotta be kidding,” or something similar.

Roses are a favorite target

Maybe it’s the beetles’ fondness for roses that puts them at the top of the not-in-my-backyard list. But despite their love of the queen or flowers, the beetles’ appetite goes far beyond the hybrid teas and floribundas.  Here’s just a shortlist of some of their other favorite foods:

The damage is hard to miss

There’s some comfort in knowing that despite how ugly the damage from the beetles is, quite often it’s mainly, not life-threatening.  But when the beetles aren’t burying themselves in our roses, they’re still busy, “skeletonizing” the leaves of plants like the ones listed above… chewing away the soft tissue between the veins. As serious as damage like this appears, a large, well-established grapevine like this can usually tolerate the attack.  Still, the beetles’ persistent feeding could permanently stunt or even kill younger plants.

Time to grab a bucket of soapy water

Linda is one of Tagawa’s advisors at Dick’s Corner.  She says while it’s not high-tech, knocking the beetles into a tub or bucket of soapy water can be surprisingly effective in our battle against Japanese beetles.

When the beetles are feeding, if they sense danger, they quickly drop to the ground.  Linda says a quick flick of your finger is the most effective way to knock the beetles down into their soapy water doom.  Note:  flush the beetle-filled bucket water down a drain to make sure the critters are gone for good.

This Japanese beetle counter-offensive isn’t a one and done.   You and your bucket need to make it a daily routine to gain and maintain the upper hand.  Beetle hunting is most effective in the cool of the early morning and late evening when the beetles are more sluggish.

There are other ways to fight back

Tagawa’s carries and recommends two of the newer products on the market that are showing promise against various stages of the beetles without harming any beneficial insects.  “beetleGONE!” is for controlling the adult beetles. 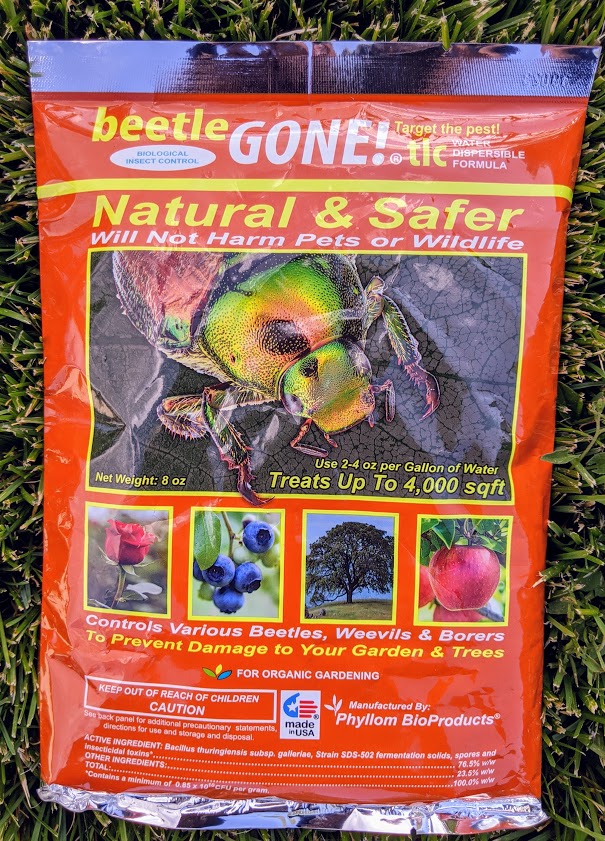 The beetleGONE! powder is mixed with water and sprayed directly onto the plants where adult beetles are feeding.  It doesn’t kill the beetles on contact.  It contains a bacteria that is deadly to Japanese beetles that eat treated vegetation.  It’s a biological and organic insecticide and will not harm insects other than scarab beetles, the family that includes Japanese beetles.

Linda of Dick’s Corner at Tagawa’s mentions that while beetleGONE! may be a little more expensive, it is not intended to be used broadly or casually as a deterrent.  It should be applied specifically when and where you see the beetles feeding.

Attacking the grubs is an option, too

The counterpart to beetleGONE! is grubGONE!  It’s a granular insecticide applied to the lawn with a broadcast spreader.  Late spring is a good time time to put it down before the adults emerge each summer. It can also be applied in later summer when eggs and being laid and larvae are forming. (One application each year, May through August). Unfortunately, our fondness for lush green lawns creates an open invitation for Japanese beetles to come calling.  That’s because the beetles’ life cycle begins down in the well-watered root zone of our turf grass.

In mid-summer, when the beetles are most abundant, hordes of female beetles stop feeding each day just long enough to lay eggs a few inches down into the soil beneath our lawns. The eggs hatch as grubs, then feed on grassroots over the summer.  They spend the winter in the soil, then pupate in the spring and emerge as adults.  The bacteria in grubGONE! can kill the grubs before they mature.

Beneficial nematodes are microscopic parasites that can be introduced into your lawn to kill the grubs of the Japanese beetles before they emerge as adults. As the directions on the package indicate, the nematodes are mixed with water and then applied to your moist lawn once adult beetles are present and beginning to lay eggs.  It’s best to apply the nematodes in the early morning and late evening and avoid the hot mid-day sun.

A conventional/synthetic approach to fight the beetles

The insecticide Eight has been around for years.  It kills on contact and should be used when the beetles are present and visible. Like all insecticides, Eight should be used only as directed.  It should not be applied when the weather is hot or windy when the spray could drift to near-by plants where beneficial insects like bees might be present. Be sure to read the label completely before using it.

Remember:  Japanese beetles begin their lives as eggs, and then grubs, that live in our lawns.  GrubEx is a granular pesticide applied to the grubs before they can emerge as adults.

GrubEx should be applied with a rotary spreader once a year, between May and August, which means that now is a good time to put it down.

As always, read and follow the directions of the package to the letter.  It’s the law!

What about Japanese beetle traps?

There are traps specially baited with a pheromone that attracts the beetles feeding in your garden, but the appeal of the bait won’t stop there.  It will draw beetles from your entire neighborhood.

Our advisors at Dick’s Corner say the traps are helpful in monitoring the arrival of the beetles but should not be used to control them.  If you leave the traps up once you know the beetles have arrived, you’re likely to end up with far more beetles than you would have had otherwise.

And then there’s netting

Tagawa’s carries a fine mesh netting that is quite effective at keeping the beetles away from plants like fruit and vegetable crops.  Our thanks to the clever Tagawa customer who sent us this picture of several pieces of netting protecting a large grapevine.

Gardeners need to wait for fruits or veggies to be pollinated before setting up the netting.  One added bonus:  netting also keeps the birds from stealing your harvest.

Some sympathy… and great advice

If Japanese beetles are making your gardening life miserable, never hesitate to come to see our Garden Advisors at Dick’s Corner.  Feel free to bring well-sealed samples of the insects or the damaged plant for confirmation.  You’ll find yourself going home great advice… and some moral support, too.

Here is our updated video about Japanese Beetle and the best methods for control. Treat Yourself to Plants that Wake Up Your Senses!

May 19, 2022
Back to All
Email Signupstay informed