Do you have these “Big 3” bugs of summer? Every summer I’ve been blaming grasshoppers for ruining the leaves on my late-blooming anemones. And the ‘hoppers are definitely not off the hook. But when I heard that the folks at Dick’s Corner at Tagawa’s have been diagnosing lots of damage from blister beetles, I got to thinking. And looking. And guess what I found.  lister beetles! Entire herds of blister beetles! And boy oh boy, were they having a fine time! If you see one blister beetle, odds are there are hundreds more near by.  For some reason, the blister beetles in my garden definitely favor the anemones.  So far, they’re ignoring other plants in the same bed, even though these eating machines are known to dine heavily on lots of different plants, including tomatoes, beans and many leafy crops.

As I watched the blister beetles on my anemones, I could see the edges of the leaves disappearing before my eyes.  These bugs are truly voracious!

Blister beetles get their name from a toxic chemical in their blood which serves as a defense mechanism.  The toxin persists even when the bugs are dead.  Blister beetles can be a real problem for ranchers. If certain varieties of the beetles that feed on hay are baled when the grass is cut, that chemical can seriously burn the mouths of livestock that eat the hay.  Horses are especially vulnerable to the toxin. Blister beetles can also damage human skin if the insects are injured or crushed.

Initially, I thought I might give up on my anemones. Just pull ’em out, since they’re obviously such a magnet for these nasty bugs and because the neighborhood deer frequently browse on them anyway. But I’ve decided I’m not going to give up without a fight. As a beekeeper, I try to garden organically, so I’m going to spray with “Captain Jack’s Dead Bug Brew.”  It’s an organic pesticide labeled for use against beetles.  Captain Jack’s is the commercial name for a very specialized bacteria called spinosad.  It works on the digestive systems of insects that eat it.  I’m hopeful, but not confident with this approach.  Captain Jack’s may not pack enough of a punch to put a big dent in such a heavy infestation of adult beetles, but I have had excellent results using it on smaller chewing insects.  We shall see.

If Captain Jack’s doesn’t knock out these wretched bugs, an insecticide called “Eight” could be an option.  It’s a more powerful, longer-lasting pesticide often recommended by the plant advisors at Dick’s Corner.  With either product, gardeners need to follow label directions to the letter, and spray at dusk when the bees have gone home.

Another beetle we love to hate 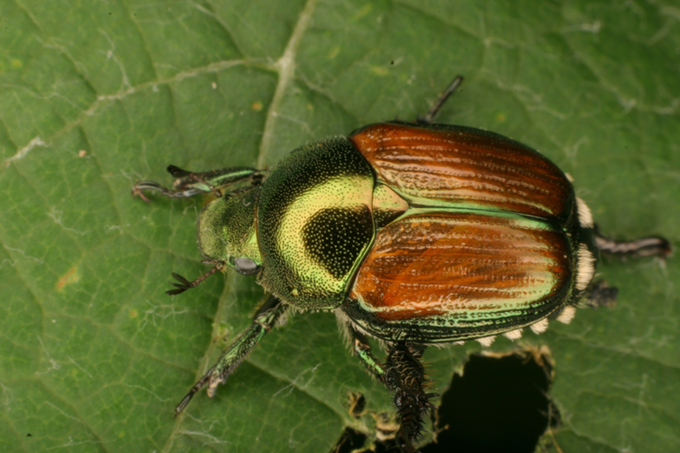 These metallic green and bronze beetles are happy to dine on dozens of different plants, but they seem to have their favorites, including roses, Virginia creeper and grape vines. And because they forage in such large numbers, it doesn’t take long for them to strip a plant bare.

Japanese beetles have a remarkable ability to skeletonize their favorite plants in just a few days.  All the more reason to make regular scouting trips through your garden looking specifically for these brilliantly colored beetles and their damage.

If you find any of these unwelcome guests, don’t delay!  Arm yourself with a small bucket of soapy water.  Knock the beetles into the water to drown, but be quick!  As soon as you touch them, the beetles will let go of the leaf or flower they’re parked on.  Make sure they fall into your bucket, not onto the ground, where they can skitter away, to eat another day.  Beetle hunting is best done in the cool of early morning or evening.  The bugs are settling in, and are a bit slower.

By the way, Colorado State University is revising its long-standing warning about the dangers of crushing Japanese beetles.  It’s been thought for years that squashing a beetle would release a pheromone that would attract still more beetles.  Research out of the University of Kentucky dismisses that warning.  Squash if you must, but drowning will take out more bugs in the long run.

Any chemical options against Japanese beetles?

Dick’s Corner has a couple of suggestions for gardeners who want to fight back against Japanese beetles with pesticides.  Top recommendations are “BioNeem” for organic gardeners or Eight (as mentioned above) for non-organic use. Both products feature pictures of Japanese beetles on their label.  As always, both should be used exactly according to label directions.

Tagawa Gardens also sells Japanese beetle traps, but we so with with a word of caution.   The traps are quite useful for monitoring to see if Japanese beetles have arrived in your neighborhood.  But if the insects do show up, leaving the traps up may actually attract still more beetles to your yard.  Use the traps with caution, and don’t hang them right over the bugs’ favorite plants.

As I said earlier, I’ve been blaming a lot of the blister beetle damage on grasshoppers. That’s because all of a sudden, I have ‘hoppers by the zillions!  Apparently, so do a lot of other folks who are asking for help at Dick’s Corner. 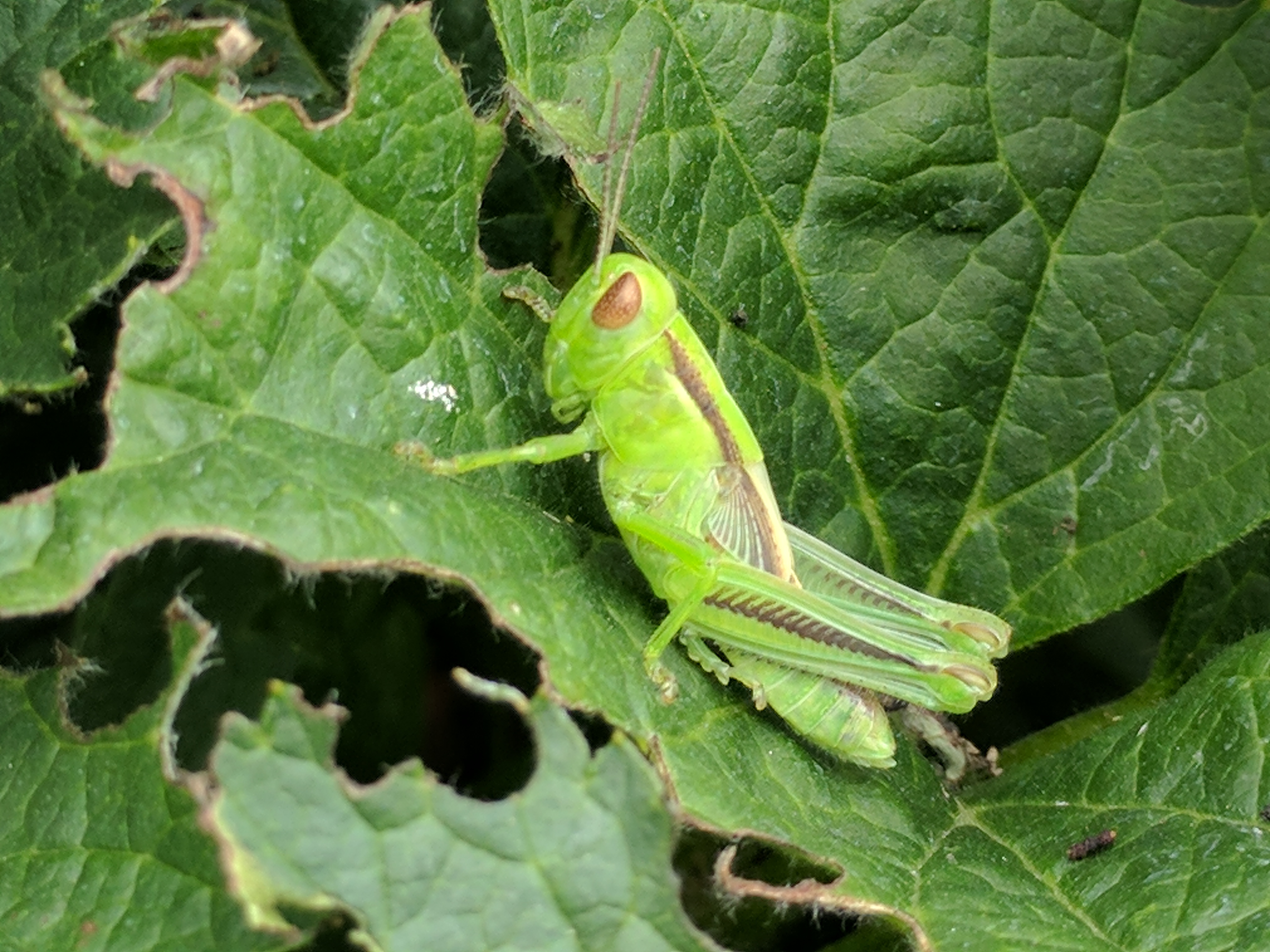 The fact is, these hoppers haven’t just arrived.  Many of them hatched out as wee little grasshoppers weeks ago.  Now they’re big and fat and decidedly annoying. Unfortunately, the best time to try to control them was back when they were young and more vulnerable to toxins.

Grasshoppers are one of the most challenging gardens pests in Colorado.  They’re fast and mobile and generally tough by nature.  If they’re a chronic problem in your garden, you can use a biological insecticide called “Nolo Bait.” This is a wheat bran product that has been inoculated with a disease organism specific to grasshoppers.  Young ‘hoppers that eat the bran die within a couple of weeks. Adult ‘hoppers take longer…. perhaps several weeks.  The organism that is toxic to the grasshoppers won’t harm birds that eat any of the infected insects.

Nolo Bait is definitely not a quick fix for grasshopper infestations, but it can be helpful over time to suppress serious ‘hopper outbreaks.

Spraying for grasshoppers with pesticides available to the home gardener generally isn’t effective.  These bugs are tough and resilient.  A direct hit with a pesticide might take out some, but far more grasshoppers survive.  It’s just not seen as a prudent way to use insecticide.

Being strategic in your gardening habits is a better approach.  For example, grasshopper eggs overwinter in a few inches of soil.  Tilling or turning the soil in early winter, exposing the eggs to freezing temperatures, can help.

And I’m noticing that the ‘hoppers chowing down on my coleus prefer the dark plants, not on the light-colored ones.  Something to keep in mind.

And if you’re inclined, or zoned, for a little additional bird life in your yard, I’m told guinea hens adore grasshoppers!  They do make a racket, but what’s a little noise if your garden is ‘hopper free!